In 1959 Rotary International District 9500 circularised clubs seeking a medico who could relieve a doctor at the Kar Kar Island Hospital, off shore from Madang, Papua New Guinea, to allow him to take two months off for medical treatment in Australia.   Dr. Bob Etherington & his wife Karen volunteered.

They addressed our Club on 12/9/89 on their Adventure and asked for 6 or 7 wheelchairs be sent to this hospital to free up beds by providing mobility for some long term patients.    So the story begins…
We scavenged wheelchairs from Queen Elizabeth Hospital, Royal Adelaide Hospital, Daw Park Repat., Philip Kennedy Centre, Resthaven, Hampstead Centre and Lyell McEwin Hospital.

Backyard garages/sheds of Rotarians were used and we were able to send off the first batch.  We continued to repair further chairs, and as the word spread we received an “order” from Honiara in the Solomon Islands for 160 wheelchairs! This took us 3 years to complete.

In 1992 Past President Ted Lloyd offered his Fairford Terrace Garage as a workshop and his engineering expertise.  When Ted ailed with Mesothelioma we shifted to Capt. John Fisher’s double garage in Alexander St. Largs where we stayed for many years. 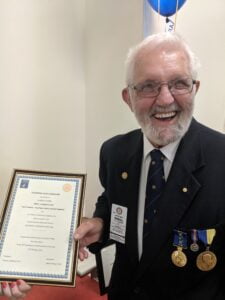 At this early stage we were still providing chairs with pneumatic tyres to hospitals.  We were storing stocks of collected/donated chairs to be repaired under tarpaulins, on lawns, in the back of the old Semaphore Sideshow building and in the D.M.H Shed 26 just recently demolished.

Our hard rubber tyres at this stage were Pramcord fitted by Fitch the Rubber man at $25 per wheel.  We ran Australia out of 7/8th inch diameter Pramcord and then also 1”!  So the next step was to engage Adelaide Technical Rubber at $4000 per order, to extrude tyres with a hole through the middle so wire could be pushed through the hole and carefully welded to hold the tyre on the wheel; A tricky operation.age we were still providing chairs with pneumatic tyres to hospitals.  We were storing stocks of collected/donated chairs to be repaired under tarpaulins, on lawns, in the back of the old Semaphore Sideshow building and in the Department Marine and Harbours  Shed 26 just recently demolished.

Before this project began, back in 1982 one of our Rotary Exchange Students was Lynda Ellis. I was her counsellor, and indoctrinated her and her family into Exchange procedures and Rotary in general.

Lynda went to Lillehammer in Norway a young girl and returned a young woman a year later. So pleased was her dad, Stan Ellis, that he joined the Rotary Club of Woodville South, later to become Charles Sturt Grange Club.  In 2001 Stan made contact with me explaining that he was dying of leukaemia but would like to leave some sort of legacy to Rotary and asked “Would you like some factory space for the Wheelchair Project?” having already set up the CSG “Toy Boys” in an adjoining section of the same complex in Oval Avenue, Woodville? YES PLEASE!

Stan passed away a fortnight to the day after having made arrangements with me to modify electrical supply to suit our needs. His will made provision for us to continue occupying the premises until the demise of his wife, Shirley.

With more space, and not having to unpack and pack up each week, we could have dedicated apparatus areas for putting hard rubber tyres on, welding, grinding etc.   We could also set up more work stations for more volunteers and broaden our scope of loan items to needy recipients to include walkers, commodes, crutches, toilet risers, shower chairs, and store wheelchair stock, pre and after restoration on the site.

The supply of wheelchairs continued through private donations, some in answer to pleas from me through WOW local radio and ABC Peter Goers interviews, but mainly from all the hospitals, Domiciliary Care, North, South, East & West, N

Once that system changed to centralisation through Domiciliary Care it became initially more difficult to access chairs to repair. However, having negotiated carefully, the situation eased and available chairs and walkers are currently delivered to us! We do not know how long supplies will be available as Domiciliary Care was taken over by Royal District Nursing Society in July 2019.ursing Homes, (particularly the Resthavens far and wide) and were picked up by me by 4 wheel drive and trailer, while those Institutions had repair departments overseen by handymen.

About 2005 ready made hard rubber 24” tyres came onto the commercial market, and so made the fitting of hard rubber tyres cheaper and easier.  Cheaper, thanks to Steve Alexander’s patronage by discounting our bulk purchases from his store Avanti Plus on Semaphore Road, and easier, thanks to Sid Donnellan for his ingenious engineering using a boat roller wheelchair handlebar and miscellaneous levers, bells and whistles, to make the fitting of a tyre a one-man job (if properly tutored).

Shirley Ellis died in late 2017 so the executors of Dalwood Stores Pty Ltd gave us l year’s notice to vacate the premises in Oval Ave. One of our volunteers, Alan Warnes, reported our need for new premises to the Rotary Club of Henley Beach the same night as I announced the situation and Frank & Jan Schirripa offered our current Wingfield premises immediately, for which we are sincerely grateful.  We moved everything out of Oval Ave. progressively in late 2018, and started in our new premises in late Jan. 2019.

Repairs involve upholstery replacement, manufacturing missing parts to fit, both gas and arc welding, painting and a host of minor adjustments. Chairs handled include wheelchairs with push rings on wheels, both barbaric and standard and push chairs with 12” or 24” wheels with no rings.

In the early years our Club sought successfully donations from other Clubs to help fund the purchase of the tyres, but now our Club is able to fund all supplies.  We did gain a grant from the Premier’s Department. in 2003 for equipment (battery drills, band saw, angle grinders, step ladders etc.) under the Man’s Shed Funding Category of the Department for the Ageing.  Recently we received a most generous donation from the Rotary Club of Henley Beach.

From the outset we had a lathe on loan from Brian Royle.  After his wife, Val, passed away earlier this year, the family has gifted it to our Project, for which we thank them.  Our Drill Press, Grinders, and Mechanical Hacksaw, were bequeathed from the estate of Past President Ted Lloyd to us.

For several years we used a friendly Salisbury trucking company to deliver wheelchairs to Donations in Kind in Brisbane for them to forward in containers to South East Asia, Papua New Guinea, Pacific Islands and the Philippines. Later we

transshipped by car/trailer to Donations in Kind Edinburgh Park until volunteer Honorary  Member Sid Donnellan (in 2018) converted a caravan into a covered trailer, with a drop tailgate, which the Club now owns.  We have named it “EL SID”.

WHERE DO THE WHEELCHAIRS GO?

Initially we knew, as we responded to requests but soon our only way of finding out was to attach a slip to each chair asking the recipients to let us know who had received it. Currently we receive about 6 slips per 100 chairs sent away.

In the 1990’s we supplied chairs to South East Asia predominantly, lately slips have been returned from Tanzania, South Sudan, Kwazi Zulu, Namibia and Zimbabwe.  Our yearly output

is about 100 chairs, and we are proud to report that today Wheelchair No. 3666 was loaded into our trailer “El Sid”.

We could not continue this project without the amazing volunteers, both past and present, who keep turning up week after week to do this incredible service.  Currently our volunteers total 9, 5 of which are not affiliated with Rotary except through the Wheelchair projects. 2 are Rotarians, and 2 are Honorary .